UNWTO Maritime Silk Road consultant Robert Travers visited Jakarta and South Sumatra in early September 2017. The visit was at the invitation of the Ministry of Tourism, which is a keen advocate of the tourism potential of the Maritime Silk Road. The Spice Islands (Maluku) in particular have played a key role in the history of maritime trade with Europe. 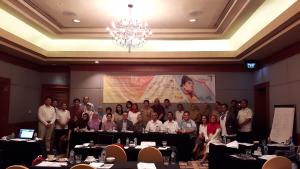 Mr Travers met with the Ministerial Cultural Tourism Acceleration Development Team and held a research seminar with this key group. The attendance of 57 tourism leaders was of great assistance to the research assignment. Attendees included leading tour operators, officials from the Ministries of Tourism, Education and Marine Affairs, as well as from the Cabinet Office, the Jakarta Old Town Authority, and from Jakarta Province. The group highlighted the importance of Indonesia’s Spice Route heritage and helped identify potential tourism products that could be developed based on the Maritime Silk Road theme. In particular, the potential to link more destinations in the Indonesian archipelago was highlighted, including the importance of developing ports, harbours, ferry services and inter-island cruising. The theme of Cheng Ho (Zeng He, the great Chinese admiral of the early 15th century) was also discussed: Indonesia has already developed an innovative tourism development and marketing strategy around this key figure of the ancient Maritime Silk Road.

Mr Travers then travelled to Old Batavia, a candidate World Heritage Site which was central to the later Maritime Silk Road: It was the headquarters of the Dutch East Indies Company, the VOC. Here he visited the National Maritime Museum and experienced a City Walking Tour which has was led by the community-based tourism operator Betourist.

The final visit on the research mission was to Palembang in South Sumatra Province, an emerging tourism destination with a rich cultural heritage: It was once the centre of the Srivjaya Empire and still has strong communities of Arab, Chinese and Malay descendants of Maritime Silk Road traders and sailors. A visit was made to Kampung Al-Munwar, (known as the little Arab kampung) which still preserves its Maritime Silk Road links with Yemen and has developed an attractive small-scale community tourism product. He had extensive discussions with the Governor, Mr Alex Noerdin and his officials about connections with the Maritime Silk Road and visited heritage sites in the city. Palembang is getting ready to co-host the 2018 Asian Games.