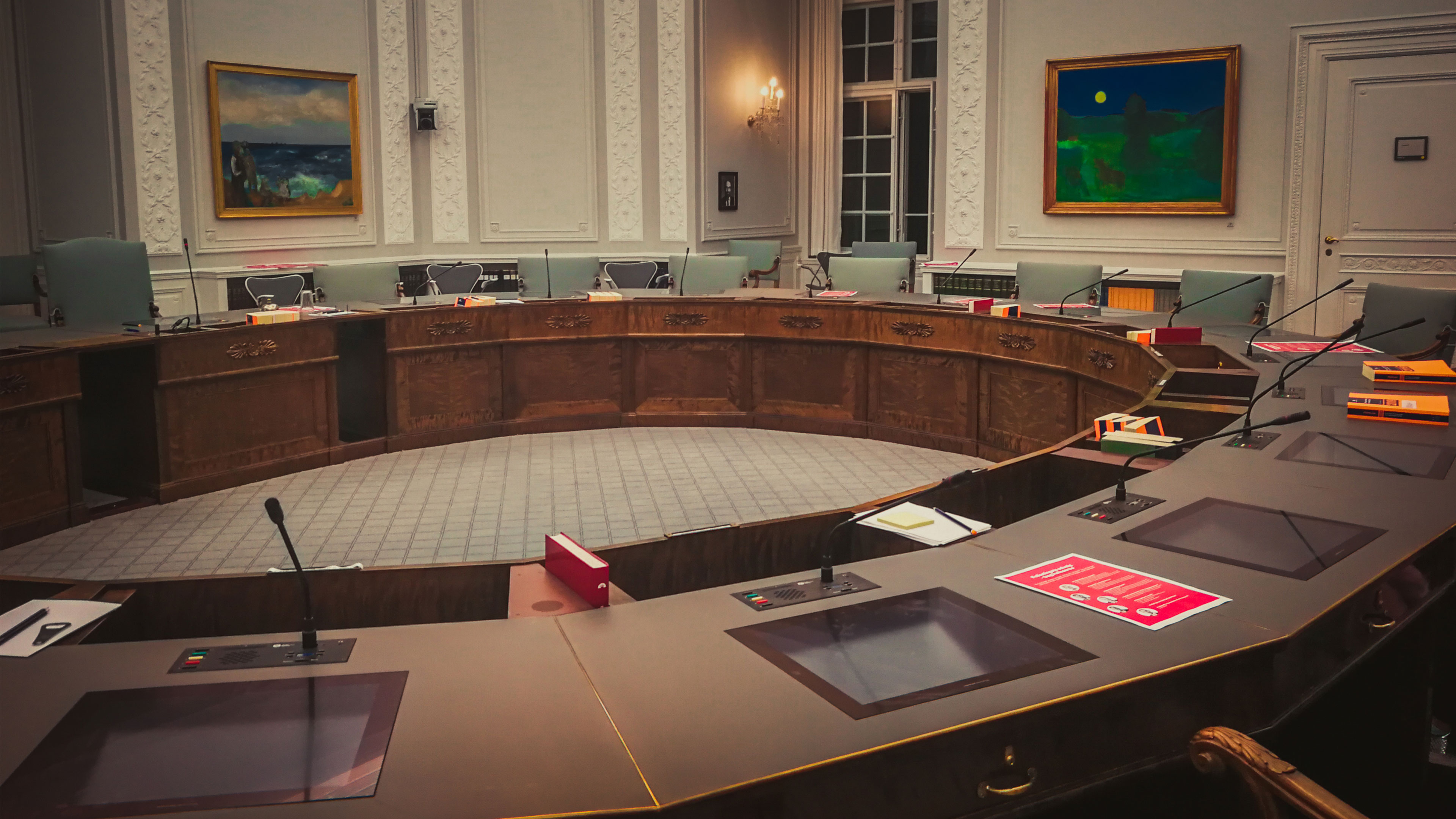 Meetings of the World Committee on Tourism Ethics

The World Committee on Tourism Ethics meets at least once a year. These meetings will be held at UNWTO Headquarters, unless it is decided otherwise. Attended by the UNWTO Secretary-General or his representative, the Committee may also invite experts or external institutions to contribute to its proceedings. 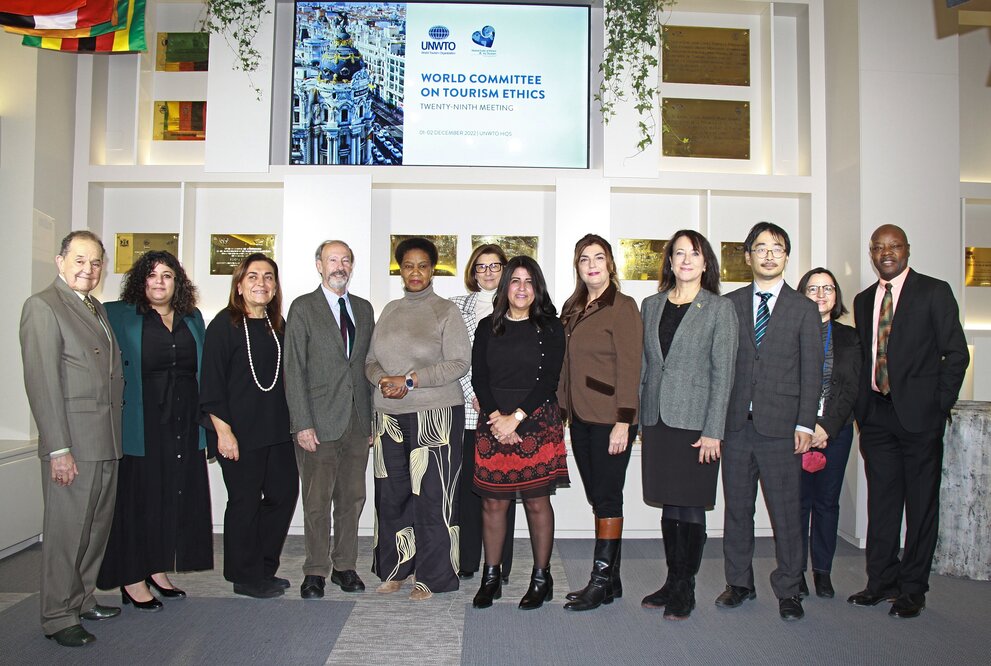 After five consecutive virtual meetings, the World Committee on Tourism Ethics holds its first in-person meeting since the pandemic on 01-02 December 2022 at the UNWTO HQs.

Many topics were discussed during the meeting, the following areas of work will include focused issues on which the Committee will pay a specific attention to: 1- Decent Work, Inclusive Growth & Community Empowerment; 2- Technology & Digital Platforms; 3- Climate Change & Environmental Sustainability; 4- Social Sustainability & Intercultural Dialogues 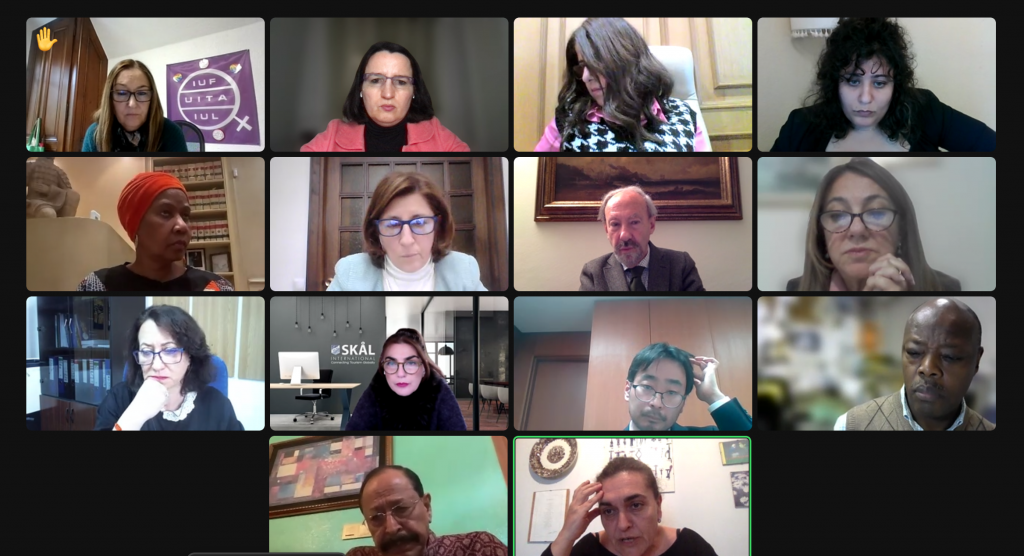 The 28th WCTE meeting was held virtually on 30 March 2022. This meeting was the first under the new Chair Dr. Phumzile Mlambo-Nguka, and new composition. During this meeting, the Committee has discussed and identified the new priority areas for the years 2022 - 2025 and decided to issue a statement of support to Ukraine. The four main priority areas identified are the following:

In addition to the aforementioned, the Committee will consider areas within Business and Human Rights in Tourism, Measuring Social Sustainability and Intercultural Dialogue in Tourism.

Due to the COVID-19 pandemic, another WCTE meeting was held virtually on 28 October 2021. UNWTO SG, Mr. Zurab Pololikashvili presented his opening remarks to the Committee overview, while Ms. Sandra Carvao, Chief of the UNWTO Tourism Market Intelligence and Competitiveness Department gave an overview on  the post-covid-19 tourism perspectives with a special focus on Employement patters. In addition, different topics related to COVID-19 certificates and the current tourism situation were dicussed by the Members of which four are attending the last meeting of their mandate. In addition to said four members, this meeting is the last meeting in the mandate of the three alternate members as well as the Chair of the Committee. 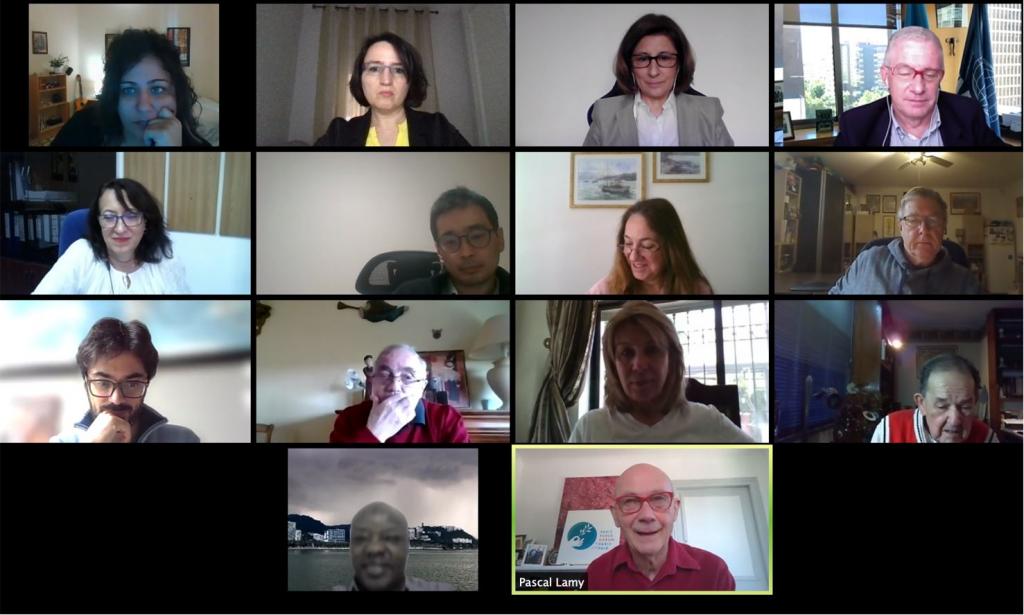 Due to the COVID-19 pandemic, another WCTE meeting was held virtually on 07 November 2021. Mr. Manuel Butler presented an overview on the COVID-19 Crisis Development in the Tourism Sector as well as the Prospects of Recovery. In addition, during the meeting, the Committee members discussed the final draft recommendation on COVID-19 Certificates for International Travel that was out to the public on June 2021 among other topics. 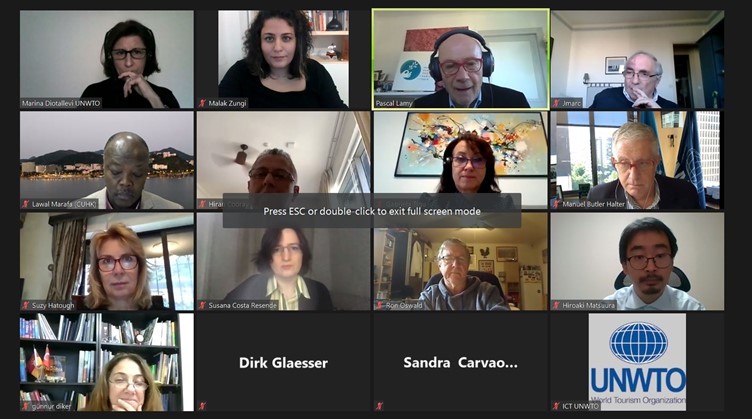 As the COVID-19 crisis continues, another WCTE meeting was held virtually on 26 November 2020. Mr. Manuel Butler delivered the opening remarks on behalf of the Secretary General. During the meeting, Ms. Dandra Carvao, Chief of the UNWTO Tourism Market Intelligence and Competitiveness Department gave a brief on the latest impact assessment on the tourism sector and Dr. Dirk Glaesser, Director of the UNWTO Sustainable Development of Tourism Department presented an update on the travel restrictions. In addition, a list of topics were covered such as ethical tourism ratings, the Framework Convention on Tourism Ethics, the UNWTO Global Tourism Crisis Committee, the International Code for the Protecition of Tourists, as well as the current situation of the signatories.

Due to the COVID-19 outbreak, a special virtual session dedicated to the topic was held on 5 June 2020 with the presence of the UNWTO Secretary-General, the Chair, members and alternate members of the Ethics Committee with interventions from Ms. Sandra Carvao, Chief of the UNWTO Tourism Market Intelligence and Competitiveness Department and Dr. Dirk Glaesser, Director of the UNWTO Sustainable Development of Tourism Department. The session resulted with a statement issued by the Committee on the ethical application of the COVID-19 mitigation measures. Moreover, the Committee revised and approved an updated version of the Tips for the Responsible Traveller – a version that stimulates the latest developments especially on safe and secure travel. 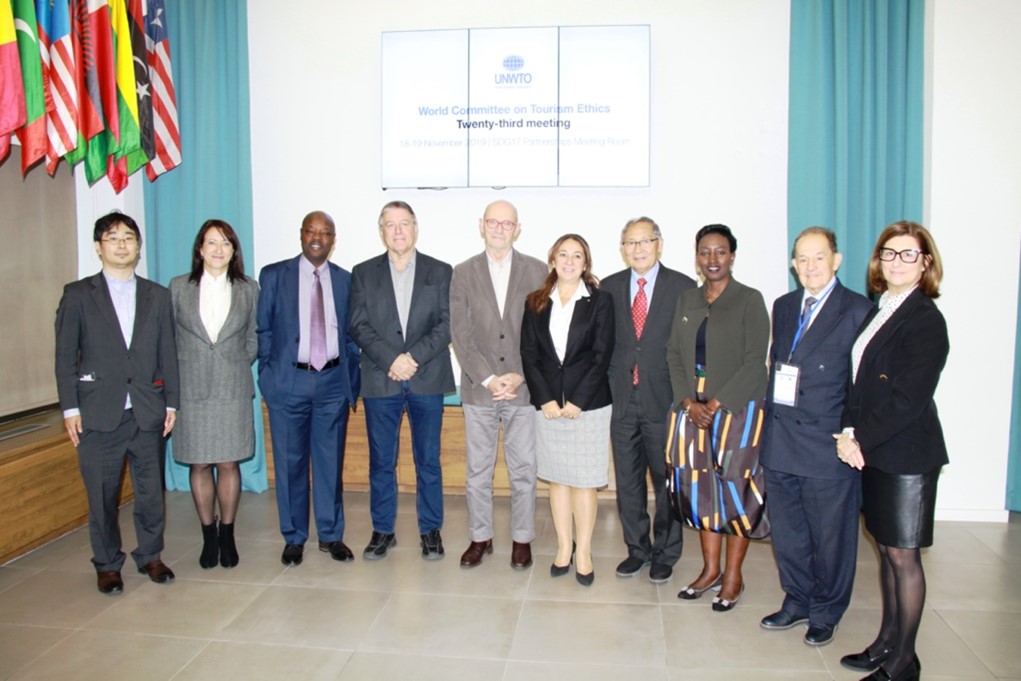 The World Committee on Tourism Ethics (WCTE) met at the UNWTO Headquarters in Madrid, Spain for its twenty-third session under the new composition endorsed by the last General Assembly in Saint Petersburg, Russia (A/RES/724/XXIII).  During the meeting, the new elected members of the Committee were introduced and signed their Declaration of Loyalty. Moreover, the brochure on the 20th anniversary of the Global Code of Ethics for Tourism was presented, an update on the UNWTO Global Report on Women in Tourism and the conclusions of the UNWTO report on New Business Models in the Accommodation Industry: Benchmarking of Rules and Regulations on the Short-term Rental Market were presented. In addition to the 2018-2021 priority topics of the Committee (overtourism and sustainability, decent work and inclusive growth, Gender Equality & Socio-Economic Empowerment), the following topics were discussed, namely, the Framework Convention on Tourism Ethics, the 20th anniversary of the Global Code of Ethics for Tourism, and Tourism and Biodiversity Conservation. 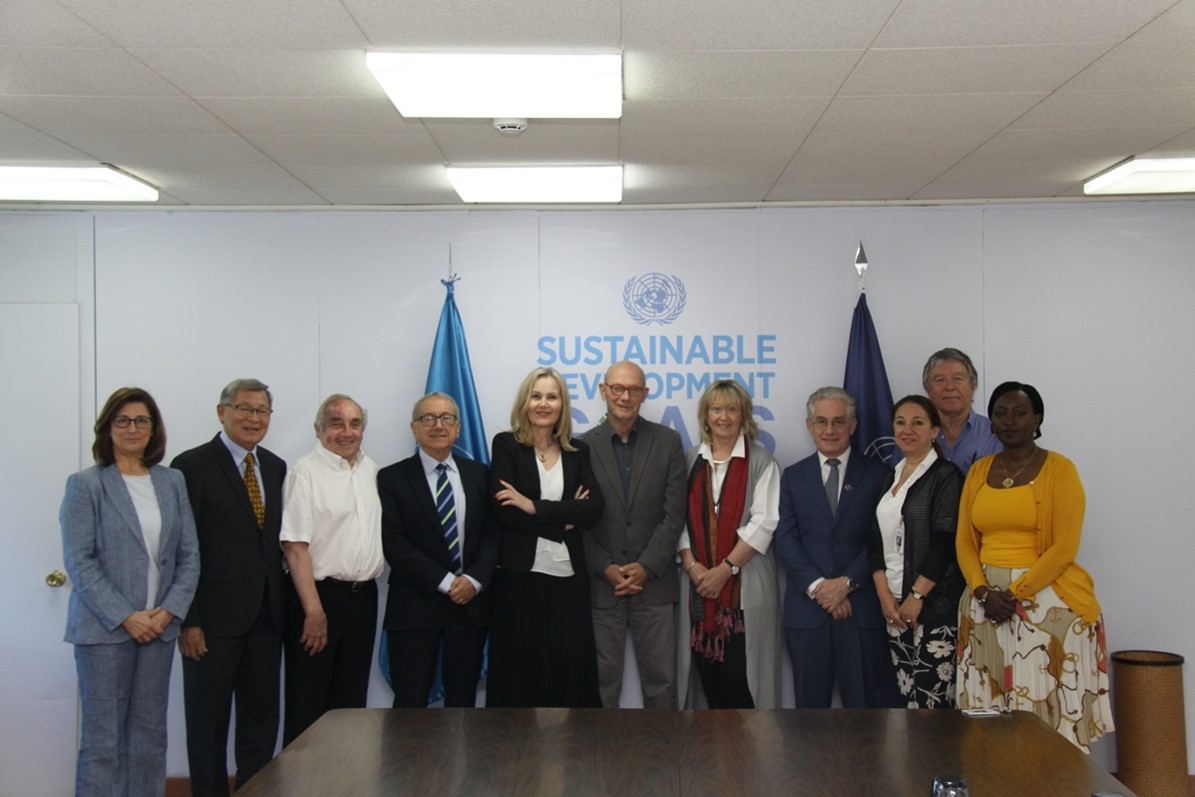 The 22nd meeting of the World Committee on Tourism Ethics was held on 29 and 30 May 2019 at the UNWTO HQs in Madrid, Spain. During the meeting, variety of topics were discussed, and the 20th anniversary of the Global Code of Ethics for Tourism brochure case collection were launched. In addition, an update on the recommendations on the responsible use of ratings and reviews was provided and discussed along with the 2018-2021 Committee priority topics, namely, Technology & Digital Platforms, Over-tourism & Sustainability, Decent Work & Inclusive Growth, and Gender Equality & Socio-Economic Empowerment. The Secretariat also provided an update about the Private Sector Commitment to the Global Code of Ethics and the Framework Convention on Tourism Ethics. 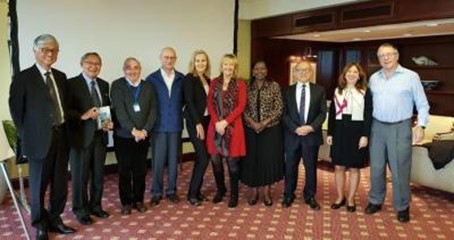 The Twenty-first Meeting of the World Committee on Tourism Ethics was held in Istanbul, Turkey on 1-2 December 2018 followed by the Third UNWTO - UNESCO Conference on Tourism and Culture hosted by the Turkish Government. The preparations to mark the 20th anniversary of the Global Code of Ethics for Tourism and the presentation of the Framework Convention on Tourism Ethics to the 2019 UNWTO General Assembly were some of the topics discussed during the meeting. During this meeting, the the second round of evaluations and voting of winner of the Ethics Award took place. The World Committee on Tourism Ethics was in charge of the selection of the winner of this Ethics Awards. Subsequently, the laureate of the Ethics Award was disclosed in January 2019 and received the Award during an official ceremony. Other agenda items included the ethical issues related to the use technology & digital platforms in tourism, over-tourism & sustainability, decent work & inclusive growth in the sector as well as gender equality & socio-economic empowerment. 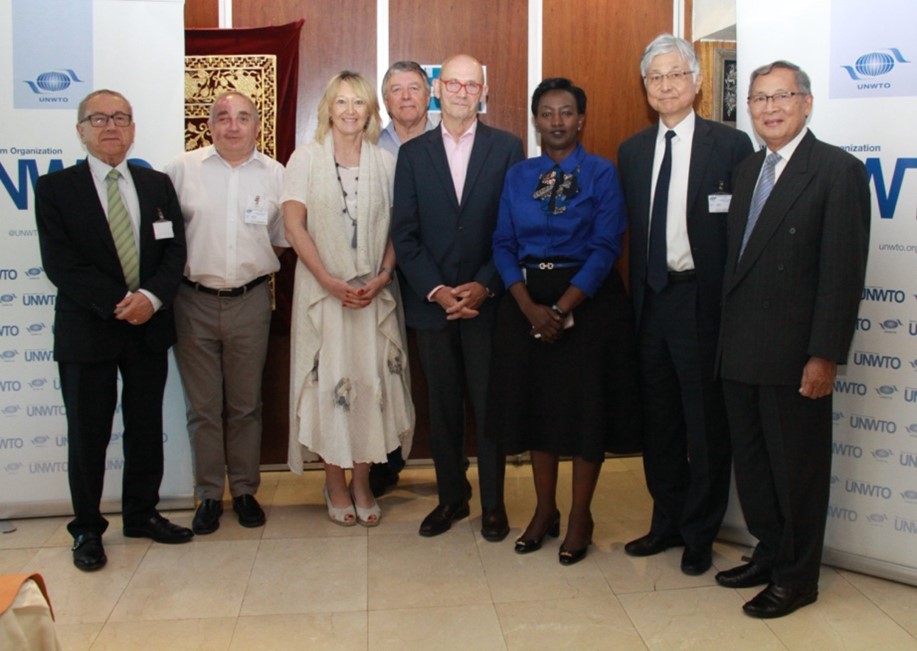 During this meeting, newly elected members of the Committee were introduced and signed the Declaration of Loyalty and the 2018-2021 Committee priority topics were discussed and identified. In addition, the topic of the UNWTO Framework Convention on Tourism Ethics was present on the table as well as the report on the status of the private sector commitment to the Global Code of Ethics for Tourism. 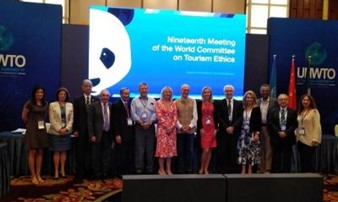 The Nineteenth Meeting of the World Committee on Tourism Ethics was held in Chengdu, China on 12 September 2017 within the framework of the UNWTO General Assembly. The Committee, which initiated the process of conversion of the Global Code of Ethics for Tourism into an international Convention was pleased to see this initiative approved by the plenary of the UNWTO 22nd General Assembly. Other topics discussed during the Committee meeting included the UNWTO Ethics Awards 2018, the preparation of Recommendations on the protection of indigenous communities in tourism and the latest developments of the 2017 International Year of Sustainable Tourism for Development.