Mr Travers was welcomed by Mr Su Quinsi of the Fujian Provincial Commission of Tourism Development in Fuzhou City on arrival. Mr Su outlined the key role Fujian is playing in the Tourism Promotion Alliance for China’s Maritime Silk Road, a tourism promotion union made up of ten coastal provinces and the Special Administrative Regions of Hong Kong and Macao. Mr Su welcomed UNWTO’s research project and requested that UNWTO become a Supporting Organisation for the annual Maritime Silk Road Festival.

Mr Travers met with the Director of the Fujian Tourism Company Ltd, Ms Shi Li Yang, and went to visit the impressive new Maritime Silk Road Exhibition in a restored historic house. This is part of the Fuzhou’s Three Lanes and Seven Alleys candidate World Heritage Site. The Exhibition covers the heritage of the Silk Road and Fujian’s special part in it. It includes historic ship design and tells of the great 15th century Chinese Admiral Zheng Ho, whose treasure fleets travelled throughout Southeast Asia, and as far as India, Mecca and the East African coast.

On the second day he visited the Kuliang Hill Station, now a popular tourist attraction. This was a thriving summer refuge for foreign residents of Fuzhou (then the Treaty Port of Fuchow and famous for the export of tea). In the afternoon, he went to the Mawei Shipyard Museum, which tells the story of the growth of China’s navy until 1949.

The following day was hosted by the Director of the Quanzhou Tourism Bureau, Mr Li Bo Qun, of which a highlight was the visit to the Quanzhou Maritime Museum. Here exhibitions tell of the travels of Ibn Battuta, who in 1327 set out on the Silk Roads from Tangier in North Africa and travelled all the way to the court of the Great Khan in Beijing. He spent much time in Quanzhou and returned to Morocco via the Maritime Silk Road, 29 years later. A key part of the museum is a superb new exhibition about the history of Zaytoun, the Arabic name for what is now Quanzhou. The city with its 1000 year old mosque, rich temples including the Kaiyuan Temple, the Song Dynasty shipwreck museum and its attractive historic streetscapes is a key part of the Sea Route of the Silk Roads: This is an extensive multi-destination candidate World Heritage Site which was nominated by China for enlisting n 2016. China’s commitment to the Maritime Silk Road is also evident in the new Maritime Silk Road Art Park where consultant Mr John Q Wang of Macao University and the Global B&R Foreign Direct Investment Group explained the concept. Mr Travers also visited the city’s port district, soon to be redeveloped as a tourism, residential and light industry project themed on the Maritime Silk Road. 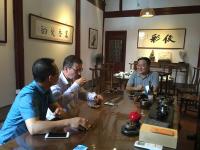 Day Four was spent visiting Fujian’s famous Tulous which are now protected as UNESCO World Heritage. Here the important theme of emigration from China via the Maritime Silk Road was illustrated. Southern China’s Hakka people, like the Hokkien, form an important part of thriving Chinese communities throughout Southeast Asia and further afield, and they travelled on the Maritime Silk Roads seeking opportunities, perhaps one of its most important if often overlooked cargoes.

The final day was spent consulting with business sector leaders in the beautiful city of Xiamen, which was about to host the BRIC summit. The opportunity was also taken to travel to the highly visited island of Gulangyu, China’s latest World Heritage Site, associated with trade, the Maritime Silk Road and China’s overseas diaspora.

Mr Travers and UNWTO are very grateful to the Fujian Provincial Commission of Tourism Development and Sunny Beijing International Communications for the great effort put in to organising the research visit. It provided many insights into the rich heritage of the Maritime Silk Road both in China and across the seas. China’s commitment to tourism and to the project were clearly evident.