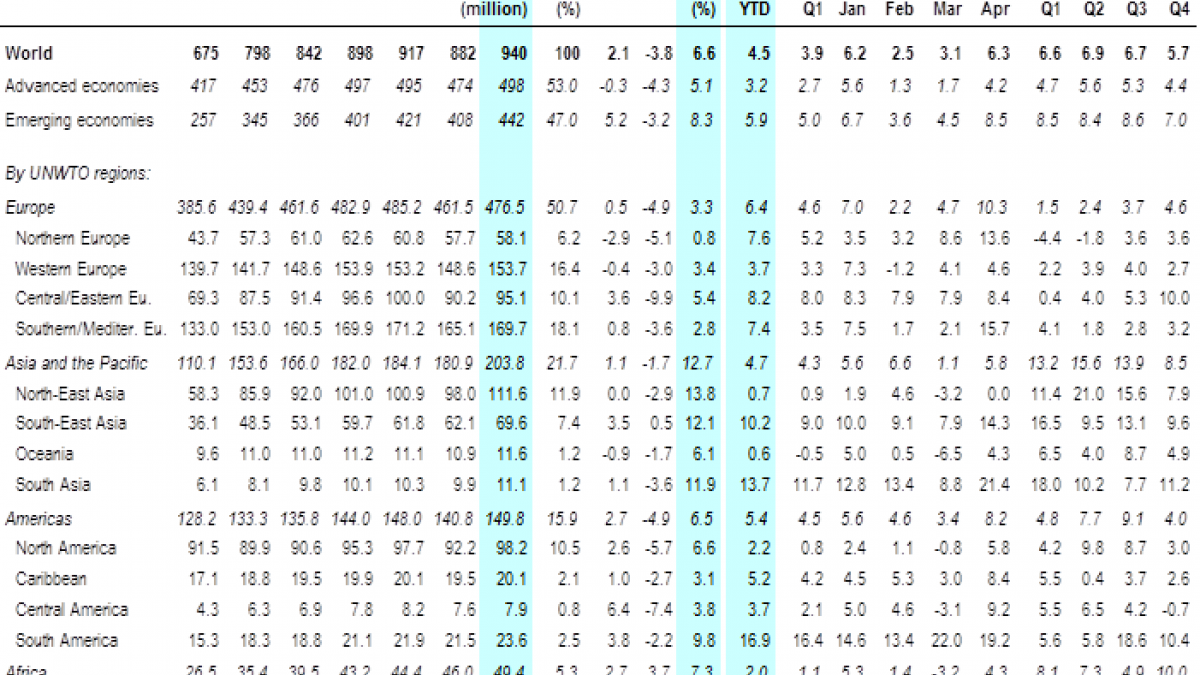 International tourist arrivals grew by 4.5% in the first four months of 2011, despite new challenges emerging since the beginning of the year. According to the latest issue of the UNWTO World Tourism Barometer, growth was positive in all regions with the exception of the Middle East. Some subregions achieved double-digit growth: South America (+17%), South Asia (+14%) and South-East Asia (+10%).

“Global tourism continues to consolidate the recovery of 2010 despite the impact of recent developments in the Middle East and North Africa, as well as the tragic events in Japan, which are temporarily affecting travel flows to these regions. We should nonetheless remain vigilant as we face other persisting uncertainties such as high unemployment and increased public austerity measures,” said UNWTO Secretary-General, Taleb Rifai.

UNWTO expects that destinations currently facing difficulties will see demand recover towards the end of the year. “It is time to support those destinations and help their tourism sectors to rebound, contributing to overall economic and social stability and progress,” Mr. Rifai added.

Short-term prospects remain largely favorable, as reflected in the UNWTO Confidence Index based on a survey among the UNWTO Panel of Experts. In spite of the changed circumstances, the over 350 participating experts worldwide maintain a positive outlook for the period May-August.

Between January and April 2011 destinations worldwide recorded 268 million international tourist arrivals, some 12 million more compared to the 256 million registered in the same period in 2010.

April was the strongest month with an estimated increase of 6%. This reflects a late Easter holiday and contrasts with the weak April of 2010 when European airspace was closed for nearly a week due to the ash cloud following the eruption of a volcano in Iceland. January (+6%) was also strong, while February and March were comparatively weaker (both at around 3%).

Europe exceeded expectations (+6%) and posted the highest growth in the first four months of 2011. Results reflect a delayed recovery in various European destinations and source markets, the late Easter holiday and the compensation for the negative month of April 2010, affected by the volcanic ash cloud. Destinations in Northern, Eastern and Southern Europe performed particularly well.

Growth in Asia and the Pacific (+5%) was in line with the world average, but slightly below previous prospects. Asia, and in particular North-East Asia, suffered the impact of the earthquake and tsunami in Japan which affected both its inbound and outbound travel as well as intra-regional travel from other markets.

In the Americas, international tourist arrivals increased by 5%, driven by the strong results of South America, which contrasted with the below average growth of North and Central American destinations.

The Middle East (-7%) and North Africa (-11%) have been considerably affected by recent developments. Nonetheless, some destinations in the Middle East have shown particularly positive results, such as Saudi Arabia and Dubai (United Arab Emirates), demonstrating the dynamism of the sector in the region. Within Africa (+2%), arrivals to Sub-Saharan Africa (+8%) stand out.

Positive outlook for the remainder of the year

As the peak tourist season gets underway in the northern hemisphere, short-term prospects remain positive. This is reflected in the UNWTO Confidence Index, a short-term outlook based on consultations with over 350 experts worldwide, which remains largely optimistic for the period May-August 2011.

There are however marked differences in the confidence levels for different world regions, with experts in the Americas and Europe anticipating the best outcomes. Confidence remains high in Africa, but lower than might have been expected in Asia and the Pacific. Experts in the Middle East are the least optimistic.

“The sustained optimism shown by the UNWTO Confidence Index is reassuring, especially as we still face many factors which could dampen growth. While global economic prospects indicate an improved second half of the year, UNWTO remains alert to social instability in certain parts of the world, volatile oil prices and concerns over fiscal stability in the USA and Europe,” said Mr. Rifai.

UNWTO maintains its forecast for international tourist arrivals in 2011 at between 4% and 5%, slightly above the long-term average and in line with previous assessments. The developments in the Middle East, North Africa and Japan are not expected to significantly alter the global forecast.