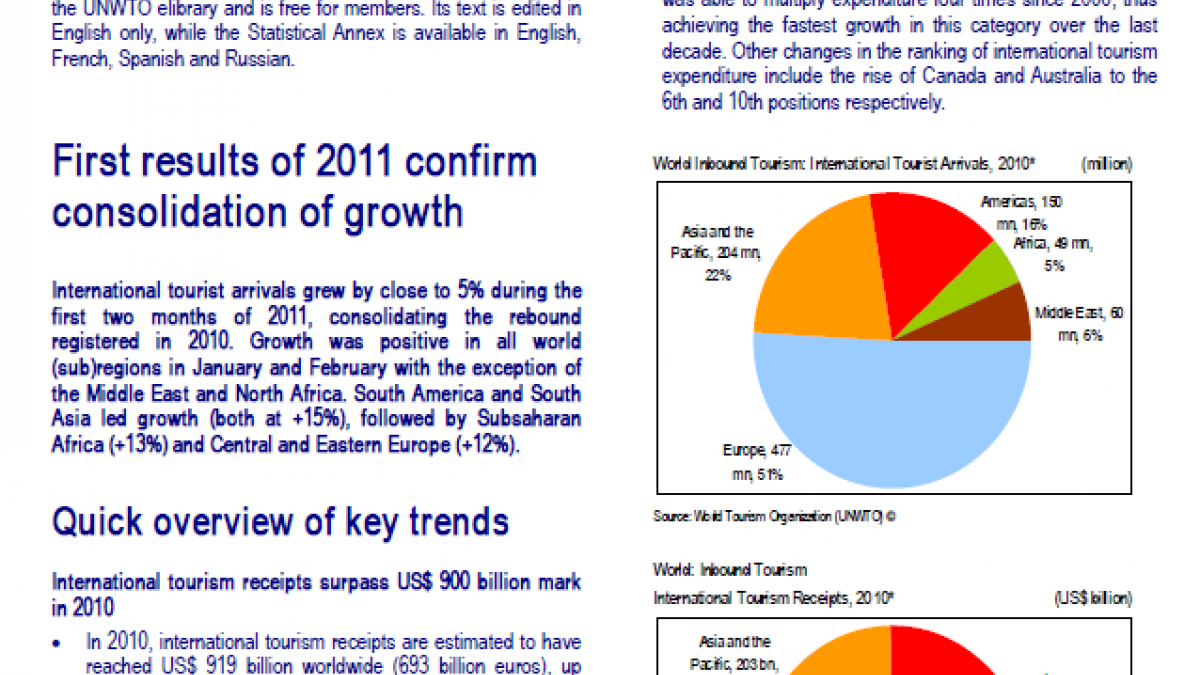 International tourist arrivals grew by close to 5% during the first months of 2011, consolidating the 7% rebound registered in 2010. According to the April Interim Update of the UNWTO World Tourism Barometer, growth was positive in all world (sub)regions during January and February 2011, with the exception of the Middle East and North Africa. South America and South Asia led growth (both at +15%), followed by Subsaharan Africa (+13%) and Central and Eastern Europe (+12%).

Asia and the Pacific, the region with one of the fastest growth rates in 2010, saw its pace of growth slow down (+6%), although from a very strong performance the previous year. Results were better than expected forEurope (+6%), boosted by the recovery of Central and Eastern Europe, and the temporary redistribution of travel to destinations in Southern and Mediterranean Europe due to developments in North Africa (-9%) and the Middle East (-10%). The Americas (+5%) was in line with the world average, with strong results for South America and the Caribbean, but rather weaker growth in North and Central America.

Worldwide, international tourist arrivals surpassed 124 million in the first two months of 2011, up from 119 million in the same period of 2010, with emerging economies (+6%) continuing to grow at a faster pace than advanced ones (+4%).

“These results confirm that in spite of several challenges, the recovery of international tourism which was remarkably strong last year is consolidating”, said UNWTO Secretary-General, Taleb Rifai in Istanbul, Turkey, opening a Special Event on ‘Promoting Tourism for Sustainable Development and Poverty Reduction’ in the framework of the 4th United Nations Conference on the Least Developed Countries (LDC-IV). “News is especially positive for emerging economies and developing countries, particularly for Africa where tourism is increasingly recognized as a driver of development, exports and jobs”, he added.

No significant change in global 2011 forecast

According to the forecast prepared by UNWTO at the beginning of the year, international tourist arrivals are projected to increase by some 4% to 5% in 2011. The impact of recent developments in North Africa and the Middle East, as well as the tragic earthquake and tsunami that hit Japan in March, are not expected to substantially affect this projected growth.

Results for North East Asia, North Africa and the Middle East are below initial forecasts, but destinations in Europe and South America are so far performing better than anticipated. On the whole, and as in previous similar situations, a temporary redistribution of traffic, together with an increase in intra-regional travel as opposed to interregional, is likely to occur.

“Although recent developments in North Africa and the Middle East and the terrible events in Japan will affect the results of their respective regions, overall growth in international tourism should not be significantly impacted”, said Mr. Rifai. “Moreover, the fall in demand in Tunisia, Egypt and Japan is expected to have bottomed out and the recovery of these important destinations will surely be consolidated during the year”, he added.

In 2010, international tourism receipts are estimated to have reached US$ 919 billion worldwide (693 billion euros), up from US$ 851 billion (610 billion euros) in 2009. In real terms (adjusted for exchange rate fluctuations and inflation) international tourism receipts increased by 5% as compared to an almost 7% growth in arrivals, showing the close relation between both indicators and confirming that in recovery years, arrivals tend to pick up faster than receipts.

2010 – China reinforces its position as a leading source market

The top 10 ranking of international tourism spenders shows China climbing to third position. China was able to multiply expenditure four times since 2000, thus achieving by far the fastest growth in this category over the last decade. Other changes in the ranking of international tourism expenditure include the rise of Canada and Australia to the 6th and 10th positions respectively.

In the 2010 rankings of the first ten destinations by international tourist arrivals and receipts, China has also reinforced its position. In arrivals, China has overtaken Spain and now ranks third after France and the USA, while in terms of receipts it ranks fourth, overtaking Italy. The only other change in the ranking by receipts came from Hong Kong (China), which climbed from the 12th to the 9th position. France continues to lead the ranking of the world’s major tourism destinations in terms of arrivals and ranks third in receipts while the USA ranks first in receipts and second in arrivals.

Excerpt of the Interim Update of the UNWTO World Tourism Barometer