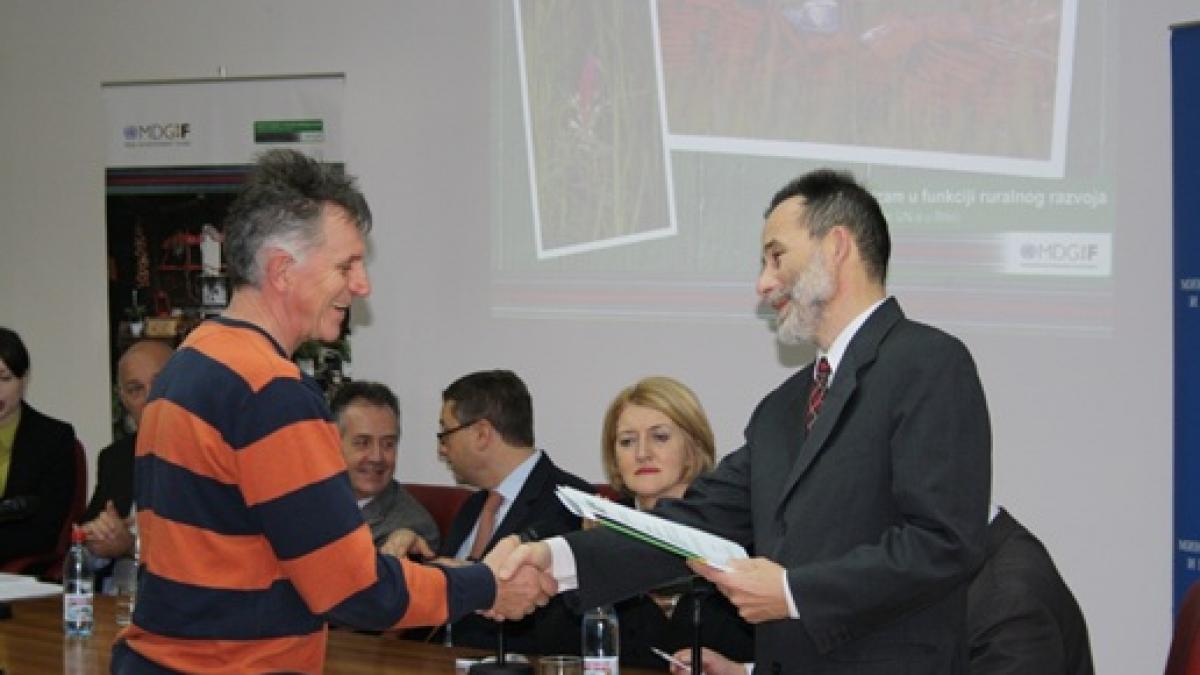 (A Serbian rural tourism entrepreneur and beneficiary of the Grants Scheme receiving the Grants Awards from the MDGF Joint Programme Manager in the presence of the State Secretary of the Ministry of Economy and Regional Development of Serbia, the Executive Director of the National Tourism Organization of Serbia, the UN Resident Coordinator and H.E. the Ambassador of the Kingdom of Spain to Serbia)

UNWTO is currently implementing the tourism component of an MDGF project in Serbia – Sustainable Tourism for Rural Development.  The project, which was launched in 2010 and will conclude in December 2012 and is financed through the contribution made by the Government of Spain, focuses on supporting the diversification of the rural economy of Serbia through tourism and tourism-related industries.  It is implemented through the joint collaboration and partnership of five UN agencies (UNDP, UNEP, FAO, UNICEF, and UNWTO) and with three national partner institutions including the Ministry of Economy and Regional Development, Ministry of Agriculture, Forestry and Water Management, as well as the Tourism Organization of Serbia.  After formulating a Rural Tourism Development Master Plan for Serbia which was approved by the Government last year, UNWTO has since focused its activities in supporting rural tourism entrepreneurship in the country where the implementation of a Grants Scheme can be highlighted as one of the main activities.

A joint Call for Proposals to award grants was published by UNDP, UNICEF, FAO and UNWTO in national newspapers and on the websites of MDGF and national partners in August 2011.  Numerous applications were received and in October 2011, grants were approved by all agencies worth in total over USD 500,000.  The objective of the UNWTO-supported grants is to support rural small and medium enterprises in improving the quality of their products with the objective to increase the flow of tourists and tourist revenues to the priority regions of South Banat, Lower Danube, Central Serbia and Eastern Serbia through (i) improved quality of services and facilities in the rural tourism offerings, (ii) improved competitiveness, as well as (iii) the stimulation of mini clusters with expanded and convenient accommodation, products and things to do and see.  UNWTO approved a total of 37 grants (the largest number of grants approved in this joint Call for Proposals) which support a wide variety of projects including improved facilities in rural accommodation; improved traditional food preparation mechanisms; support of rural agricultural initiatives such as honey-making associations; improvements related to the development of tourism products such as bird-watching, pedestrian trails, mapping of routes; as well as information and promotion material such as brochures, website development, stands, signage and storyboards, etc.

In its efforts to enhance national and local ownership of the project, UNWTO has entered into a partnership with the National Tourism Organization of Serbia (NTOS) to be the national implementing partner of the Grants Scheme.  At the local level, the Local Tourism Organizations of the four target regions were closely involved in generating grant applications and will also be involved in their implementation.

On 23 January 2012, an official Grants Awards Ceremony was held at the NTOS Headquarters with the participation of all the beneficiaries and with the participation of the State Secretary of the Ministry of Economy and Regional Development of Serbia, Mr. Goran Petkovic; the UN Resident Coordinator, Mr. William Infante; H.E. the Ambassador of the Kingdom of Spain, Mr. Arturo Laclaustra Beltrán, and the Executive Director of NTOS, Ms. Gordana Plamenac as well as senior representatives of all participating UN agencies, and the Serbian media.