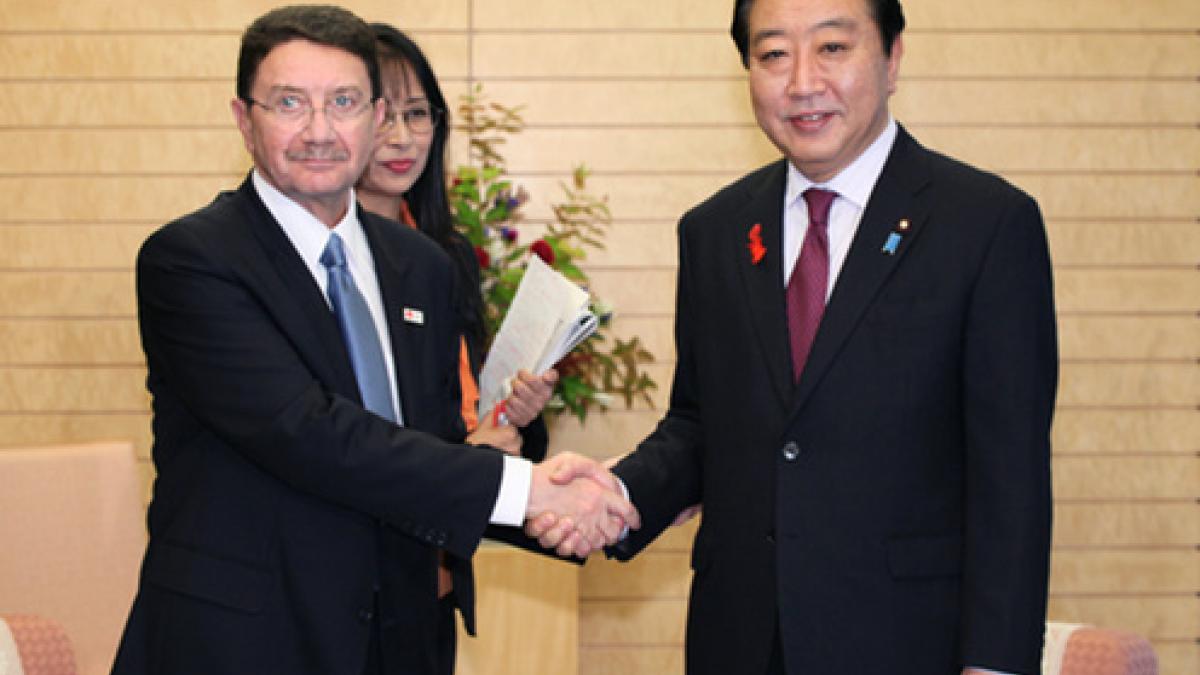 “In the process of revitalizing Japan, tourism plays an important and indispensible role,” said the Japanese Prime Minister during his meeting with Mr Rifai.

Joined by David Scowsill, President and CEO of the World Travel & Tourism Council (WTTC), Mr. Rifai assured the Prime Minister that the two organizations would continue to transmit the message that Japan is back and stands ready to receive visitors. “Tourists face no difficulties in accommodation, transportation or any other part of their travel,” said Mr Rifai. He further stressed that this message would be conveyed at the forthcoming UNWTO General Assembly (8-14 October, Gyeongju, Korea).

“It is vital that we continue to work together to share accurate information on Japan’s recovery, provide support to those areas most affected and pass on the message that the situation has returned to normalcy in most of the areas which suffered the impact of the March earthquake,” he added.

Emphasising the importance of the sector to the Prime Minister, Mr Scowsill said, “Travel and Tourism accounts for 9 per cent of GDP globally and 7 per cent of GDP in Japan. The industry is working hard to drive the recovery process and we anticipate that business will return to normal levels in 2012”.

Following the earthquake and tsunami that struck Japan in March 2011, both inbound and outbound travel suffered significantly. Nevertheless, the decline in international tourism to Japan has been clearly reversing in recent months, while outbound travel returned to growth in July (departures from Japan registered a 5% increase in July and 9% growth in August compared to the same months in 2010).

During his visit, Mr. Rifai visited tsunami affected areas to observe the current state of recovery, including Sendai, the nearest major city to the earthquake, where he met with government officials, to share information and exchange views on revitalizing tourism in the Tohoku region.

In Sendai, Mr. Rifai attended the Special International Symposium on the Revitalization of Japan´s Tourism Sector and Quake Affected Regions. The Symposium, jointly organized by UNWTO, Japan Tourism Agency (JTA) and the Ministry of Foreign Affairs of Japan, was held to aid the recovery and revitalization of tourism in the country, with debates on best practices from other earthquake affected regions, the state of tourism recovery, and lessons learned from the earthquake and tsunami. Participants recognized that the lessons learned from the Japan earthquake provide extremely valuable knowledge for other countries.

Participants, including UNWTO officials, Japanese Government representatives and the President and CEO of WTTC, issued a special message concluding that, “it is crucial to restore and increase the number of visitors to Japan, and to work toward further growth of international tourism in the Asia-Pacific region”.

During their stay in Tokyo, the two heads of the world´s leading tourism organizations also met with the Minister of Infrastructure, Land and Tourism (MILT) and other senior government officials who expressed Japan´s gratitude to UNWTO and WTTC for the great support extended to Japan following the 11 March 2011 disaster.