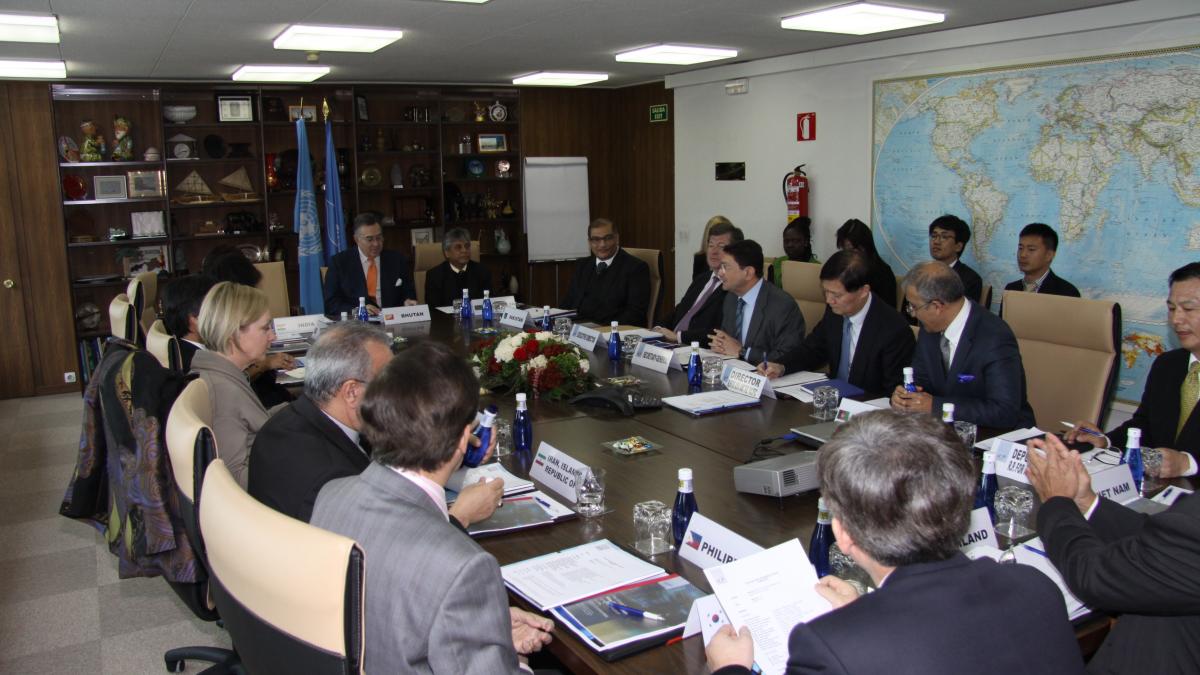 Ambassadors to Spain of thirteen Asia Pacific countries were briefed by UNWTO Secretary-General Taleb Rifai on Monday the 4th of March, during their reunion at UNWTO Headquarters for the Annual Asia Pacific Ambassadors´ Meeting and Luncheon.

The luncheon, hosted every year by UNWTO´s Regional Programme for Asia and the Pacific, is an important annual event as it gives regional ambassadors an opportunity to network and learn more about UNWTO´s activities both globally and in the Asia Pacific Region.

During the pre-lunch meeting, UNWTO´s Secretary-General Mr. Taleb Rifai briefed attendees about UNWTO´s main programme of work for 2013 and the organization´s current main areas of advocacy. Following this, Mr. Xu Jing, Regional Director for Asia and the Pacific of UNWTO gave a briefing on UNWTO´s activities in the region.

The year 2012 was a strong year for tourism worldwide, and especially in the dynamic Asia Pacific region, which recorded a 7% increase in tourism arrivals (the highest of any world region) as well as the fastest growth rate for the second year in a row. A recent study has shown that Asia and the Pacific is one of the most open regions in terms of visa facilitation (a boost to both interregional and intraregional travel), and the next twelve months look promising with UNWTO experts predicting a continued growth of 5-6% for Asia and the Pacific in 2013.

230 million people travelled to Asia in 2012, and the sector´s continued growth in the face of economic, environmental and climate change-related challenges has proven its resilience and ability to provide jobs and export exchange earnings as well as its potential to contribute to the development of a green economy despite uncertain and challenging times.

Secretary-General Mr. Rifai noted, however, that the sector is not immune to risks, and that continued efforts must be made to combat the challenges the industry faces – particularly those related to economic downturns, natural disasters and tourism´s contribution to climate change.

The tourism sector is inherently interconnected, as Mr. Rifai highlighted, and the actions of one region (for example, Europe) will inadvertently affect other regions (for example, the Asia Pacific).

UNWTO´s key areas of advocacy, based on the organization´s mission to promote responsible, sustainable and universally accessible tourism include travel facilitation (visas), taxation (¨intelligent taxation¨ of the travel sector), formulation of an international convention on consumer and tourist protection and connectivity (transport links including air connectivity).

The Asia Pacific Region has not only proven its ability to face and survive through economic and environmental challenges worldwide; it has also continued to upstage the importance of the tourism sector at a national level with five new countries (Mongolia, Myanmar, the Philippines, Thailand and Vietnam) joining the Global Leaders for Tourism Campaign in 2012.

Practically, UNWTO´s Regional Programme for Asia and the Pacific (RPAP) has undertaken a number of key efforts in the region to boost the sustainability and competitiveness of the sector in its 28 Asia Pacific Member States.

Australia has been a key partner in the production of UNWTO´s most recent regional studies and publications, with topics including ecotourism, climate change (both in collaboration with the University of Queensland), key Asian outbound tourism markets (with Tourism Australia) and domestic tourism (funded by Republic of Korea). This year, RPAP will work with the Asia-Pacific Economic Cooperation (APEC) as well as the Association of South East Asian Nations (ASEAN) to undertake detailed research on visas and travel facilitation in the region.

Looking ahead, RPAP is also working with Macau´s Global Tourism Economy Research Centre and the Republic of Korea to develop a regional tourism competitiveness index, which instead of ranking countries unrealistically, aims to evaluate and contrast certain elements of tourism destinations while taking note of country-specific factors.

Finally, UNWTO´s RPAP is working to advocate for sustainability in the region by establishing observatories which apply the UNWTO Indicators for Sustainable Tourism Development and measure the impact of tourism in destinations. So far, five sustainable tourism observatories have been established in China and both Bhutan and the Philippines have expressed interest to also establish observatories in their countries.