A language that speaks of endless historical tales

Sauris or Zahre as it was called in the old German dialect, is a village immersed in the nature of the Carnic Alps. The municipality, located in a green valley dominated by the splendid peaks of the Dolomites, is the highest in the Friuli Venezia Giulia region situated at a height ranging between 1,000 and 1,400 metres above sea level.

The typical Alpine landscape is characterized by extremely thick woods, alpine meadows studded with malghe “shepherd’s huts”, and the green lake that changes its colours according to the seasons. Sauris immediately wins visitors over due to its unspoilt beauty and its calm, relaxing atmosphere.

The area has been semi-isolated for centuries, making it possible for traditions, costumes language and architecture to remain unaltered over time. In Sauris, in addition to Italian and the language spoken in the Friuli area, a fascinating, ancient language is still spoken today. This is a German dialect, belonging to the southern Bavarian language group which is considerably similar to Carinthian and Tyrolean dialects. On the one hand, the Sauris language de zahrar sproche has been influenced over time when mixing with bordering populations speaking Romance languages.  On the other hand, it has preserved many archaic features, derived from 12th century German, mittelhochdeutsch, as was spoken when the community was established. For this reason, Italian and foreign scholars alike have been studying the local language for over a century. It is thanks to their linguistic studies that the area of origin of the first settlers has been identified as well as the period of colonisation. For centuries, the language in Sauris was only spoken, with its written record beginning in the mid-19th century and, as a result, it shows a remarkable wealth in poetry production that lives on to this day.

A peculiarity of the Sauris landscape is visible by its type of architecture. The Sauris architecture represents the most evident link with nearby Carinthia. In fact, the buildings are characterised by building blocks created using locally available materials including wood and stone. The houses and the rustic buildings are characterised by a ground floor in stone, a basement and raised floors in wood built using the ancient blockbau technique where entire tree trunks create a solid structure thanks to their interlocking corners.

Turning crisis into an opportunity

To combat the destruction as a result of the 1976 Friuli earthquake, Sauris was among the first municipalities in Friuli Province to launch a new and exciting initiative.

Its local community created the Progetto Sauris or Sauris Project which supported the village in creating major infrastructures, enabled the recovery of valuable buildings without compromising urban and architectural planning and established the conditions to turn Sauris into a tourist destination. The project provided new socio-economic opportunities in the village and resulted in the foundation of new businesses in the agri-food sector including a ham factory, a craft brewery, a cheese refinery, farms to produce cheese, small fruits, and herb production. The project was not only successful in retaining the village population but also attracted entrepreneurs from neighbouring areas. 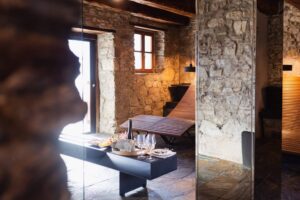 An innovative model of hospitality

The Albergo Diffuso “scattered hotel” of Sauris was the first of its kind to be developed in 1994, in Italy. It is an alternative model of accommodation that allows guests to experience their stay in close contact with the local community, its customs and traditions, while being guaranteed regular hotel services under a central management system.

The 32 accommodation units are in historical houses scattered across the village, which have been renovated in line with a programme of territorial redevelopment in order to curb the depopulation of this alpine area. 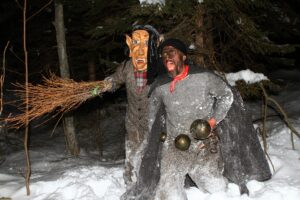 The Fulgenzio Schneider Cultural Club, founded in 1976, continues to preserve and to promote the unique Sauris/Zahre language, an ancient dialect of German origin, and its cultural heritage, through initiatives that involve both the locals and tourists. A range of activities are organised to celebrate Sauris culture including traditional Sauris Carnivals, Wooden Sculpture Symposiums or Arte nel Borgo, Sauris language courses, sessions aimed at teaching the local language in primary schools, activities of the Zahre Choir with concerts and Zahrar Meisse “masses”, and carving masks courses.

Another initiative to promote the local language is introducing new signage on trails and roads which will feature two languages: Italian and the Sauris language.