The Balcony of the Sibillini

San Ginesio is a small village of less than 3,200 inhabitants, situated in the Marche region. It has been a center of culture and learning since the Middle Ages, when it was one of the most important towns of the Marquisate of Ancona and the Duchy of Camerino. San Ginesio is famous for its 100 churches, which house an important artistic heritage. The patron saint of the city is the Catholic protector of theatre and actors, so the history of San Ginesio is inextricably linked to the performing arts and theatres. The first permanent theatre in the Marche region was built in San Ginesio in 1547.

San Ginesio was also the birthplace of Alberico Gentili, a 16th century jurist who wrote extensively on international law. He was recruited by the court of Queen Elizabeth I of England and by Oxford University. Today, a Study Centre in the village preserves his intellectual heritage.

Speaking of natural heritage, San Ginesio is called the “Balcony of the Sibillini”: its unique position in the Sibillini mountains allows a breathtaking view, stretching from Mount Conero and the Adriatic Sea to Mount Gran Sasso.

The town lies in the National Park of the Sibillini, a wonderful natural setting dotted with vast forests and breathtaking gorges, with a rich heritage in medieval history and folk tales (such as that of Sibilla, the ancient sorceress after whom the mountains are named). 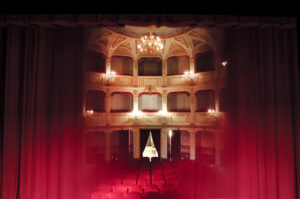 The history of music and theatre

San Ginesio is famous for its 100 churches, which host an important artistic heritage that is inextricably linked to the performing arts and theatres. (The first theatre was built in 1547) The GINESIO FEST theatre festival aims to position San Ginesio as a national hub for performing arts. 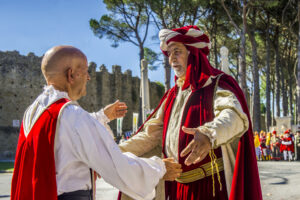 The promotion of San Ginesio is done through the tourism portal of the village as well as that of the province. San Ginesio is also a member of national tourism networks that have involved the village in the SAVE THE APPS initiative – a project that includes an e-commerce platform for local produce and digital maps to help tourists discover ancient monasteries and churches. 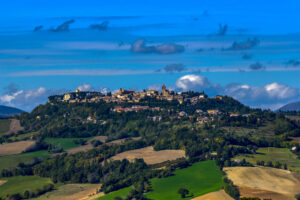 Caring for tourists and residents’ wellbeing

San Ginesio has been involved in the piloting of advanced programs on digital medicine as well as on the prevention and management of earthquakes and other natural disasters. Through a solid partnership with the Aristide Merloni Foundation, San Ginesio took also part in the RINASCO (Italian for ‘reborn’) project, comprising a series of initiatives aimed at promoting social cohesion and economic growth in earthquake-stricken areas of Italy.