The home of the Masaai

Olergesailie is a village located in the Southern region of Kenya, close to the sedimentary basin in the East African Rift Valley. Olergesailie is famous for its Olorgesailie Prehistoric Site, located on the floor of the Great Rift Valley between two extinct volcanoes, Mt. Olorgesailie and Oldonyo Esakut to the south-west of Nairobi. Hand axes have been unearthed here, many of which date back almost one million years and are some of the oldest ever found. Most of the axes are egg-shaped with razor sharp edges for cutting and hewing – perfectly formed tools to fit a human hand. Due to the settlement of the first humans in this area, there is a large number of tools categorized as belonging to the Acheulean period. It has been excavated for many years and it contains many artifacts that have been accumulated for a long time. The unearthed objects found in this region are dated between 1.2 million and 490,000 years ago. According to the National Museums of Kenya, the finds are internationally significant for archaeology, palaeontology, and geology. In fact, Olorgesailie Prehistoric site is part of the Tentative Lists of States Parties published by the World Heritage Centre (UNESCO).

Mt. Olorgesailie is also important to the surrounding community, the Maasai. Though no longer practiced, it was used by the Ilkeekonyokie Maasai to perform sacrifices to their God -Enkai. The village of Olergesailie is home to the Maasai people. Visitors can experience the Maa culture and enjoy the traditional foods. They can even live with the Maasai in the manyattas for a day to learn about their rich traditions. 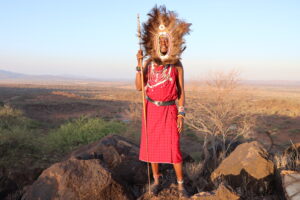 Olorgesailie Prehistoric Site has excellently preserved biological and cultural resources. The village is committed to its promotion and conservation thanks to a model that combines community, conservation and tourism business to bring benefits for communities, travelers and the environment. 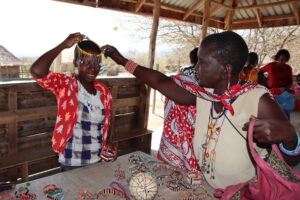 The village is committed to promote economic sustainability with the implementation of activities such as capacity building and fostering tourism opportunities that benefit the community such as employment or cross selling.

Environmental sustainability is a priority

The environmental dimension of sustainability is prioritized at local, county and national levels focusing on effective managed of resources, climate action, water consumption, management of solid waste and ban on single use plastic.