Territory of the city of Uzice

The Mokra Gora region boasts many different plant species of national and international importance. 102 species are protected under the Bylaw on Designation and Protection of Strictly Protected and Protected Wild Species of Plants, Animals and Fungi. The forests of the region are essential in regulating the ecological conditions in the immediate and wider surroundings and are major contributors to the global and regional ecosystems.

Hydrographic potential of the Šargan and Mokra Gora region comprises groundwater, springs, large and small river streams and hot mineral water. The river network of Mokra Gora includes the Kamišna, the White Rzavand the Black Rzav and their tributaries.

The area of the Mokra Gora village is a treasure trove of cultural and historical assets, tradition, ethnological heritage and folk architecture, which bespeak the population’s spirit and cultural identity. The tumultuous history of this region situated on the border between the East and the West has left numerous material traces, cultural monuments and spirituality.

The traditional living quarters in Mokra Gora and its hamlets are old Wallachian log cabins, with a wall-supporting structure of stone and a four-sided roof made of shingles or logs. In addition to residential quarters, a traditional yard also featured other ancillary structures: dairies for storing dairy products in the summer and curing meat in the winter, smokehouses for drying fruit, “chardak” structures for storing maize, pens, stables, watermills androlling mills used for rolling linen (cloth). Today, only a fraction of the traditional household structures have been preserved in their original form. One of the hamlets that still preserves the region’s folk architecture tradition is Milekići. 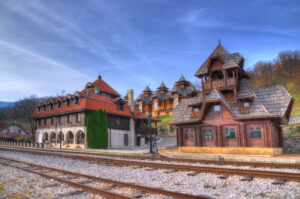 On the train to the past

Mokra Gora is a village that has been given a new life thanks to its active community, who participated in the reconstruction of the narrow-gauge railway Šarganska osmica, a tourist railroad which retraces the route of old historical tracks, and that is now protagonist of new tourist routes that stimulate the development of small rural centres. 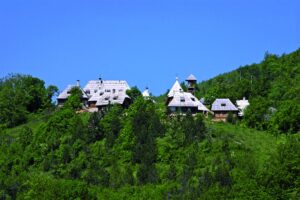 Exceptional characteristics to be protected

The area of Mokra Gora, Šargan and the southern slopes of Mount Tara have been part of the protected area of the National Park Tara since 1981, when this was formed. A higher level of protection was given in 2005, when this area was given the status of the area of exceptional characteristics, also thanks to the new attention created by the historic railroad.