Architecture from a range of historical periods: Gothic and Medieval

The oldest mention of Castelo Novo, then called Alpreada, dates back to around 1202 AD. To protect his kingdom against any potential threats, King Dinis rebuilt the village castle adopting typical Gothic features and commissioned several Medieval-style buildings. Archaeologically, the village integrates one of the most important archaeological sites in this region – the Roman baths of Quinta do Ervedal and a remarkable fortified settlement from the Bronze Age. The vital element of this built landscape is water, present as a source but also anthropized in fountains and rock circuits. In relation to its patrimonial, historical and archaeological value, the village has been part of the “Aldeias Históricas de Portugal Network” since its foundation. 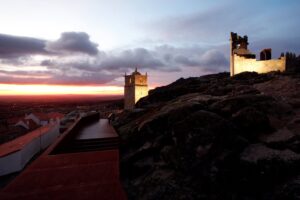 Mobility of the future

The village has launched an “Inclusive and sustainable urban mobility” project, a pilot program which targets companies, residents and visitors. It is the first location in mainland Portugal with 100% sustainable mobility, free of carbon dioxide and noise emissions. There are 5 electric vehicles which are available for free use in addition to serving as a transfer service to the train stations. This project contributes to the strengthening of smooth mobility in the Network of Historical Villages of Portugal. 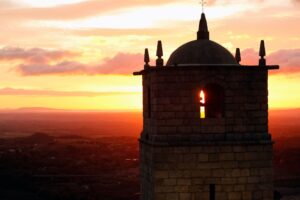 Certified as a Biosphere Destination, the Historical Village of Portugal Network is the first international network to obtain this certification. Maintenance of the landscape is ensured and reinforced as it is a protected landscape. 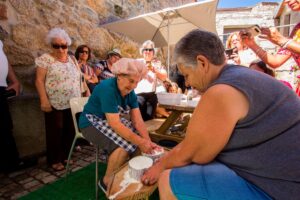 To strengthen the feeling of belonging in children and to encourage child entrepreneurship, the village has initiated a new programme called “Creative Stories”. It is a social, cultural and educational project developed by Aldeias Históricas de Portugal in partnership with the municipalities of the network and has the cooperation of the respective school groups in the village.