Much of the territory of Aguarico is located within two protected areas with high natural and cultural value: the Yasuní National Park and the Cuyabeno Wildlife Reserve. Thanks to conservation and sustainable management strategies, the region has received international recognition. In 1989, the Yasuni Biosphere Reserve was declared and in 2017, the Yasuni-Cuyabeno-Lagartococha wetland was recognized as the largest wetland in Ecuador and was listed as a Ramsar site.

Aguarico is a municipality largely inhabited by indigenous Kichwa and Waorani cultures. These people are characterized by defending the jungle and giving high priority to the protection of their cultural heritage, including their traditions, language, clothing and gastronomy.

In Aguarico, it is the indigenous cultures who promote and manage tourism in the territory, as an economic alternative that allows them to maintain their identity. The tourism model adopted is that of “community tourism”. Part of this model are the Community Tourism Centers: Sacha Ñampi and Yaku Warmi, two of the main tourism enterprises in Aguarico that value indigenous cultures.

One of the main actions of the Community Tourism Centers is to generate strategies to protect and promote cultural diversity and respect for ancestral production and cultural exchange spaces, as well as the recovery, preservation, and enhancement of the social memory and cultural heritage of the Kichwa and Waorani cultures.

Among the main attractions in Aguarico are the indigenous cultural manifestations, including gastronomy, dance, music, shamanism “a spiritual healing practice”, ancestral games and the making of handicrafts woven with natural fibres. The most visited bodies of water are the Laguna Jatun Cocha, the lagoon of Tambococha known as the lagoon of the mirrors, and the mouth of the river Cocaya where pink dolphins are frequently sighted. 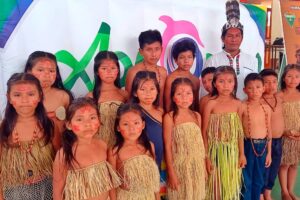 A rich history of culture

All tangible and intangible cultural resources in Aguarico have been recognized and registered with the National Institute of Cultural Heritage of Ecuador. Among these, are the festive ritual dances, the culinary uses of cocoa, the preparation of the chambira palm fibre for artisanal uses, the creation of handicrafts, and storytelling pieces such as the “Myth of the Zancudo Cocha lagoon” or the “JuriJuri Legend”. 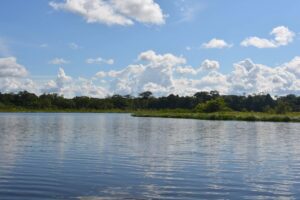 Every rural commune in Aguarico has a women’s group and in urban areas there is the Inés Arango Women’s Association and the Orquídeas del Yasuní Food and Beverage Services Association. These groups, through alliances with organizations such as Cocina Sin Fronteras, have focused on strengthening the knowledge of local gastronomy in young people between the ages of 17 and 29, granting them the certificate of gastronomic hosts. 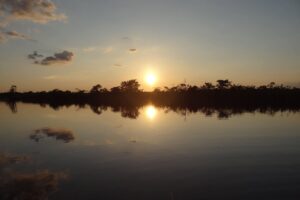 The Sacha Maki Art Gallery is a proposal for the marketing and sale of handicrafts managed by the municipal government of Aguarico. Artisans from different districts make their products and take them to this hub for sale. At the end of each month, the collected sales are distributed throughout all the artisans.